Summary
With the game on the line, the D-League’s third-leading scorer did what he does best: put the ball in the bucket. Tied with the Grand Rapids Drive, Vander Blue received the ball, attacked the lane and lifted up the game-winning floater to hand the D-Fenders a 123-121 victory. 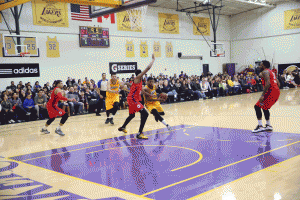 Player of the Game
Vander Blue: Not only did Blue provide the go-ahead basket, he also led the D-Fenders with 25 points. The Drive did a good job of corralling him late, as Blue missed his first five attempts in the fourth quarter before pulling through with the biggest shot of all.

Prospect Watch
Justin Harper (17): The last-second drama was a two-parter, and Harper provided the finale. Grand Rapids had one last chance to tie the game on a layup by Chris Horton, but Harper was there to swat it away, sealing victory to go along with 16 points, nine rebounds and four 3-pointers.

Josh Magette (22):
The Alabama native had another night of near-flawless direction of the offense, racking up 17 points and 14 assists with only one turnover. Magette also hit a big and-1 bucket with 50.8 seconds left before Grand Rapids’ Jordan Crawford answered with a tying 3-pointer to set up Blue’s big moment.

The Lakers once again assigned Ivica Zubac to the D-Fenders, whom he gave eight points and 12 rebounds in 32 minutes. It was a frustrating night from the field for the 19-year-old, as he shot just 3-of-10 and only attempted three second-half shots.

Key Stat
15: The D-Fenders’ biggest lead of the night. After a monster opening quarter, Los Angeles led 36-21 heading into the second, but the Drive held tough behind a triple-double from No. 2 prospect Ray McCallum (18 points, 12 rebounds, 13 assists). The lead exchanged hands 13 times, but the D-Fenders were the last to take it, pushing their league-best record to 17-5.

Looking Ahead
The D-Fenders will continue their homestand by hosting Oklahoma City on Thursday at 7:30 p.m. Led by No. 6 prospect Dakari Johnson, the Blue are one of the league’s hottest teams, having won seven straight games to better their record to 15-7.